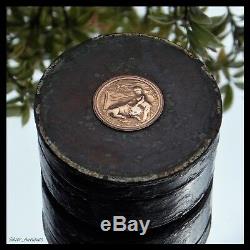 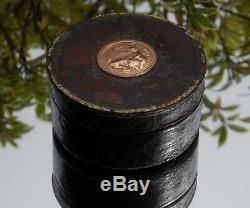 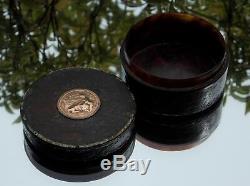 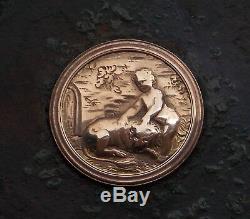 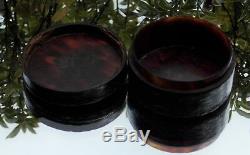 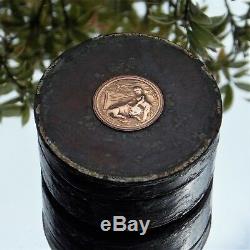 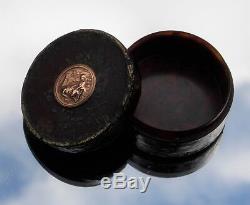 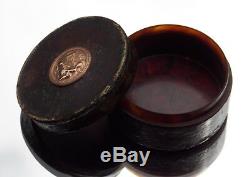 RARE FRENCH 18TH CENTURY LOUIS XV 22ct GOLD MOUNTED VERNIS MARTIN SNUFF BOX with. This is a Rare French 18th Century. 22ct Gold Mounted Vernis Martin Snuff Box , this Rare Snuff Box was Crafted by one of the Martin Family in France in circa 1750 making this rare Box over 260 years old, these wonderful vernis Martin Snuff Boxes were very Popular with the French Royal Family in the 18th Century, this wonderful early snuff box is circular in shape and has a Vernis martin finish to the outside, this is then mounted with a 22ct Gold Cartouche to the centre with an image of a cherub and a lion, the detailing is stunning, this has been tested and does test as 22ct gold, to the inside of this snuff box the interior to both the top and bottom is crafted in faux TORTOISESHELL, the quality of the craftsmanship is superb, this stunning and rare mid 18th century. Vernis martin Snuff Box would have once belonged to a wealthy French Family and used daily for snuff taking in a time many years ago when things where so very different. Martin Family, French lacquerware artists of the period of Louis XV. 1770are remembered for perfecting the composition and application of vernis Martin, a lacquer substitute named after them, patented by Guillaume and Robert in 1730. In 1748 their factory became part of the Royal Factory of Furnishings to the Crown. Among their commissions were coaches and rooms at Versailles. Vernis Martin, lustrous lacquer substitute widely used in the 18th century to decorate furniture and such personal articles as brisé fans and snuffboxes. The process of adding bronze or gold powder to green varnish was perfected by the Martin family, hence its name vernis Martin (Martin varnish). Highly praised by Voltaire, it was developed to imitate East Asian lacquerware being imported into France during the Louis XV period.

Vernis Martin was made in several colours, green and a golden red being the most characteristic. Just over 1 inch height...

This does show signs of wear as expected to the body with loss as you can see, you can still see some of the original green finish , the faux TORTOISESHELL is in lovely condition , that being said it doesnt detract at all from its rare beauty, just mentioned for accuracy, its condition is reflected in its price. All Antique silver items will show some signs of wear, which only adds to the history of the object..... The item "RARE FRENCH 18TH CENTURY LOUIS XV 22ct GOLD MOUNTED VERNIS MARTIN SNUFF BOX" is in sale since Sunday, April 22, 2018. This item is in the category "Antiques\Silver\Solid Silver\Other Solid Silver". The seller is "silver_antiques_uk" and is located in United Kingdom.