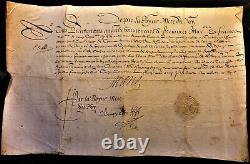 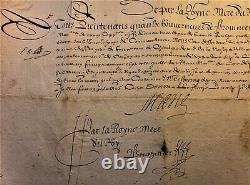 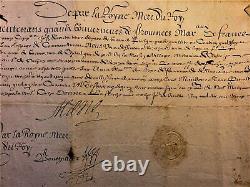 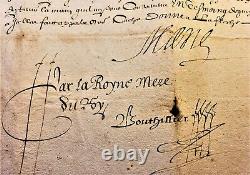 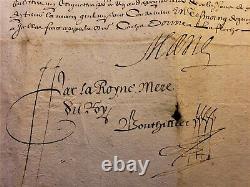 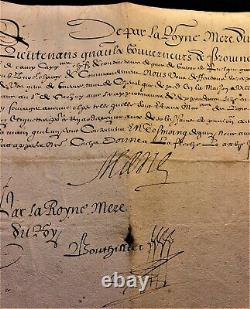 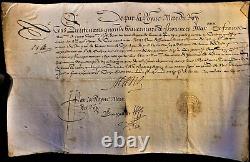 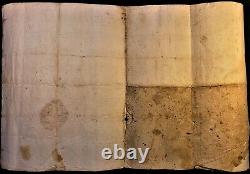 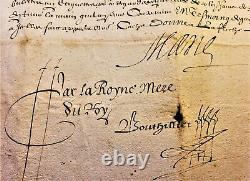 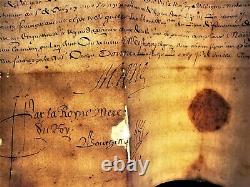 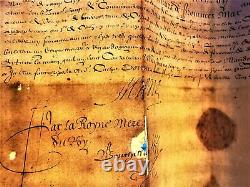 Rare document with Royal Seal, dated July 1620 signed'Marie' by Marie de Medici, Queen of France, wife of Henri IV, mother of Louis XIII. Countersigned by Claude Bouthillier, secretary of state to the queen-mother, Marie de Medici who was the most powerful man in the kingdom after Richelieu. Because Henri planned to be absent for long periods on state business, Marie d'Medici was crowned Queen on the 13th of May 1610, so that she could act in his place while he was away. She served as Queen Regent as mother of Louis XIII until he came of age in 1617. She was most noted for her political intrigues and artistic patronage.

Claude Bouthillier (February 4, 1581 March 13, 1652), Sieur de Fouilletourte, French statesman, began his professional life as an advocate. In 1613 he was councilor in the Parliament of Paris, and in 1619 became councilor of state and a secretary to the queen-mother, Marie de Medici. Marie de Medici, Queen of France, wife of Henri IV, mother of Louis XIII Marie de Médicis, Italian Maria de Medici, (born April 26, 1573, Florence [Italy] - died July 3, 1642, Cologne [Germany]), queen consort of King Henry IV of France (reigned 15891610) and, from 1610 to 1614, regent for her son, King Louis XIII (reigned 1610 - 1643). Marie was the daughter of Francesco de Medici, grand duke of Tuscany, and Joanna of Austria. Shortly after Henry IV divorced his wife, Margaret, he married Marie (October 1600) in order to obtain a large dowry that would help him pay his debts.

In 1601 Marie gave birth to the dauphin Louis (the future Louis XIII), and during the following eight years she bore the king five more children. Nevertheless, their relationship was strained. Marie resented Henrys endless infidelities, and the king despised her unscrupulous Florentine favorites, Concino Concini and his wife Leonora. Upon the assassination of Henry IV (May 14, 1610) the Parliament of Paris proclaimed Marie regent for young King Louis XIII. Guided by Concino (now the Marquis dAncre), Marie reversed Henrys anti-Spanish policy.

She squandered the states revenues and made humiliating concessions to the rebellious nobles. Although Louis XIII came of age to rule in September 1614, Marie and Ancre ignored him and continued to govern in his name. On April 24, 1617, Louiss favorite, Charles dAlbert de Luynes, had Ancre assassinated.

Marie was then exiled to Blois, but in February 1619 she escaped and raised a revolt. Her principal adviser, the future Cardinal de Richelieu, negotiated the peace by which she was allowed to set up her court at Angers. Richelieu again won favorable terms for her after the defeat of her second rebellion (August 1620).

Readmitted to the kings council in 1622, Marie obtained a cardinals hat for Richelieu, and in August 1624 she persuaded Louis to make him chief minister. Richelieu, however, did not intend to be dominated by Marie. He enraged her by rejecting the Franco-Spanish alliance and allying France with Protestant powers. By 1628 Marie was the cardinals worst enemy.

In the crisis known as the Day of the Dupes Nov. 10, 1630, she demanded that Louis dismiss the minister.

Marie de Médicis built the Luxembourg Palace in Paris, and in 162224 the Flemish artist Peter Paul Rubens decorated its galleries with 21 paintings, portraying the events of her life, that rank among his finest work. Size: 14.5" x 9.5" (37 cm x 24 cm), Watermarked, Sealed and Signed.

The item "MARIE DE MEDICI QUEEN OF FRANCE AUTOGRAPH wife of Henri IV mother of Louis XIII" is in sale since Tuesday, April 6, 2021. This item is in the category "Antiques\Manuscripts".

The seller is "antiqueparchments" and is located in Kansas City, Missouri. This item can be shipped worldwide.