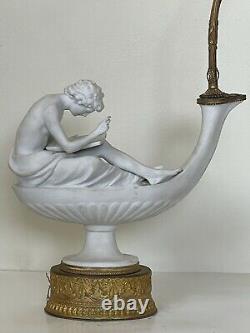 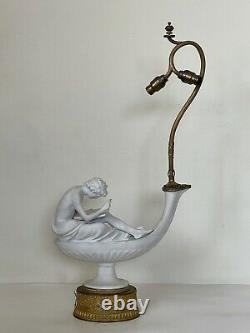 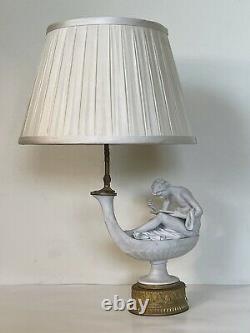 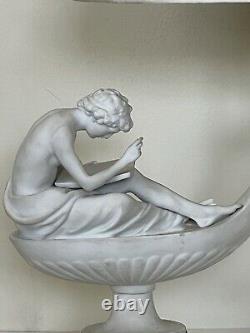 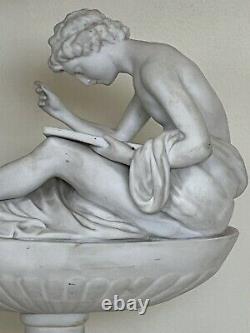 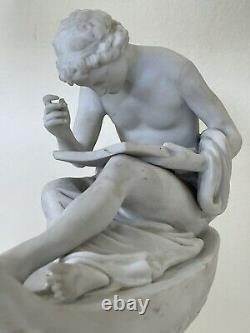 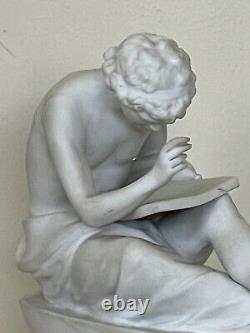 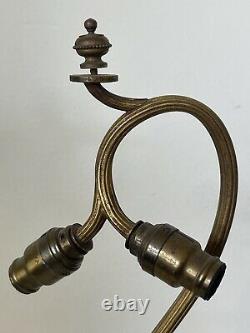 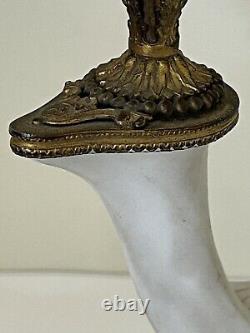 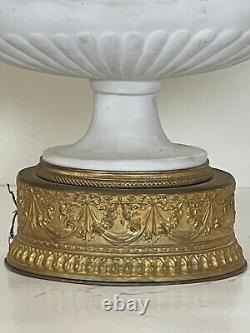 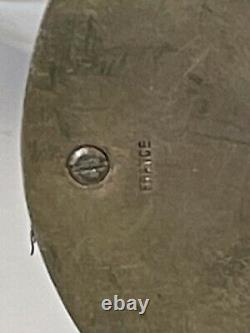 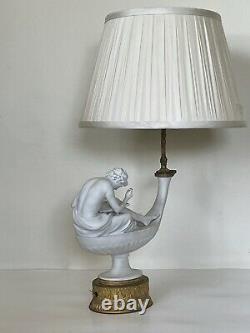 IMPORTANT 19TH CENTURY ANTIQUE NEOCLASSICAL SCULPTURAL TABLE LAMP BY REVERED FRENCH SCULPTOR LOUIS SIMON BIZOLT. COMPRISED OF A SEATED ALLEGORICAL SEVRES BISCUIT PORCELAIN MALE FIGURE SEATED ON TOP OF AN OIL LAMP WITH A TABLET IN HAND. A CLOTH IS DRAPING THROUGH HIS ARM AND AROUND THROUGH HIS LEGS. THE SPOUT IS JOINED BY AN ORMOLU GILT BRONZE NECK RESTING ON GILT BRONZE ORNATE BASE. NO CHIPS, CRACKS, OR DAMAGE WHATSOEVER. DIMENSIONS: 21"H x 10"W. Allegorical figures sitting on lamps were based on ancient models brought to light during the excavations at Pompeii and Herculaneum. The young man, writing on a tablet, symbolizes Philosophy. The lamp stands on a rectangular base of finely chased and gilded bronze. The figurer, designed by Boizot to be produced in biscuit porcelain by the Sèvres Porcelain Manufactory, were used with Boizot's authorization to decorate lamps also entirely of biscuit, based on a bronze model by Rémond and Thomire.

Europe learned of recently unearthed ancient artworks not only through engravings, but also through the many drawings done by artists who visited the sites. This abundant visual documentation was a general source of inspiration for artists in all fields. At the same time, they were nourished on theories expounded by the likes of the Comte de Caylus in Le Recueil d'Antiquités Égyptiennes, Étrusques, Grecques et Romaines (1752) and Johann Winckelmann in Gedanken über die Nachahmung der grieschische Werke (1755, published in English in 1765 as Reflections on the Painting and Sculpture of the Greeks). This new look at antiquity thus directly or indirectly inspired the forms taken by the objects discussed here. French sculptor Louis-Simon Boizot guided his career up a ladder of academic credentials and institutional positions during the tumultuous period of the late 1770s.

A first-rate craftsman, a gifted designer, and son of one of the designers at the Gobelins tapestry factory, Boizot studied at the Académie Royale in Paris and in Rome as the winner of the Prix de Rome in 1762. After being received as a full member of the Académie Royale in 1778, he exhibited regularly at the Paris Salon until 1800. Boizot worked primarily with small-scale and decorative sculpture, designing pieces such as gilt bronze clocks, caryatids for a chimneypiece at the Château de Fontainebleau, ornamental centerpieces, and even a toilet seat for the Comtesse du Nord. As artistic director of the sculpture studio at the Sèvres porcelain manufactory beginning in 1773, he oversaw the design of more than 150 models reproduced in biscuit porcelain, including official portrait busts of Louis XVI and Marie-Antoinette. During the French Revolution, which he supported, Boizot was an advocate for the preservation of historical monuments through his role in the Commission des Monuments.

Although he had difficulty adapting to the Republican-favored Neoclassical style, he still received commissions for public monuments. This item is in the category "Collectibles\Lamps, Lighting\Lamps". The seller is "vintagerotty" and is located in this country: US. This item can be shipped to United States, Canada.