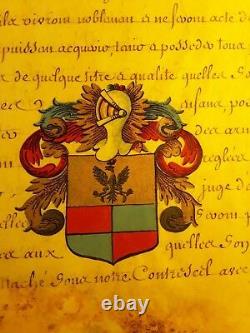 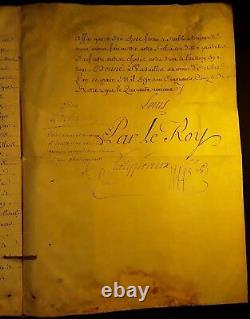 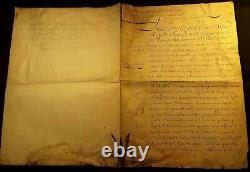 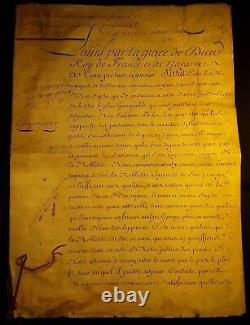 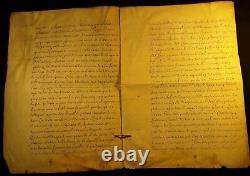 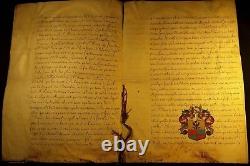 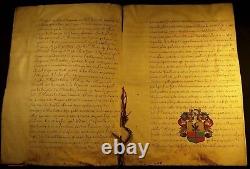 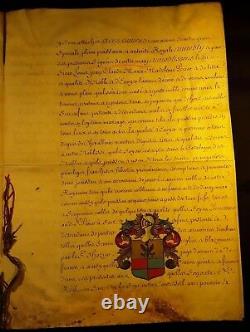 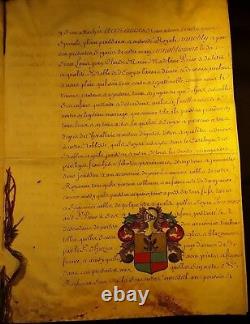 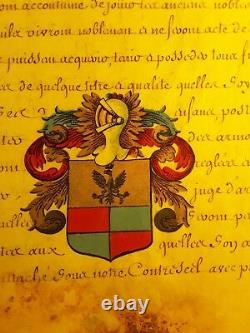 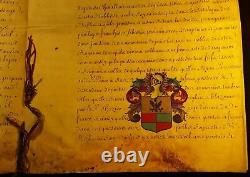 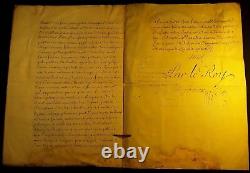 KING LOUIS XV Signed Letter of Ennoblement Coat of Arms Painted with the mention "Signed of Our Hand" - 1755 (7 Pages). Letter of ennoblement in favor of Louis Jean Claude Madeleine Perier established in 1755 Coat of Arms pained by d'Hozier, signed. The text of this manuscript on vellum. Is interesting because it details the reasons for the ennoblement and in particular the military exploits carried out by the members of his family his father received 14 wounds during his 20 years of service, the members of the Parliament of Grenoble. 15.3/8" x 11" (39 cm x 28 cm).

This is really a very rare previously lost rediscovered document! While trying to get some additional information about it I was surprised to find some very interesting facts. I found a couple of books published long ago referring to the events described in the documents content as well telling us that this document was lost. Here is the text (translated from French) where this document was mentioned as lost that I found in the following books. Réunion des sociétés des beaux-arts des départements. (GENERAL LIBRARY of the UNIVERSITY OF MICHIGAN) published in 1903. Essay of the armorial of the French artists (XVI-XVIIIe centuries): Sculptors...

(THE LIBRARIES COLUMBIA UNIVERSSITY/FINE ARTS LIBRARY). Like Jean de La Motte, of which he has been mentioned above (n XII), Louis-Jean-Claude-Marie-Madeleine Perier or Perrier was chief clerk of the.

He was ennobled in the month from October 1755 by letters patent that we unfortunately did not find. Anything about him except that he was received in the order of Saint-Michel in 1756; in the lists of members of this Order, the royal Almanacs.

From 1762 to 1765 gave him a new title, that of General Secretary and Chief Clerk of the King's Buildings (address: rue Saint-Thomas du-Louvre). From Almanach of 1766, he was described as the First Clerk of the Buildings, and in that of 1770 his address became place of the Old Louvre. He seems to have died in 1788'. Regulation of Coat of Arms for Périer.