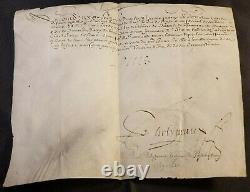 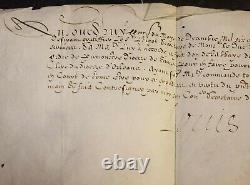 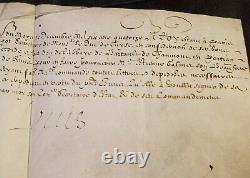 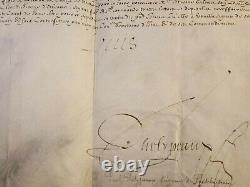 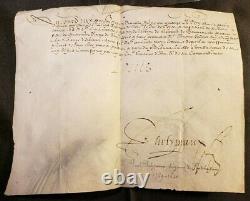 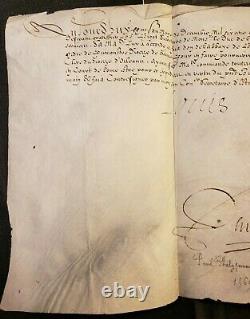 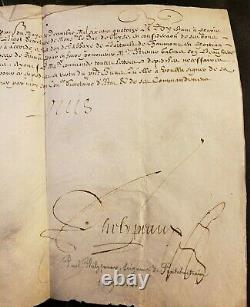 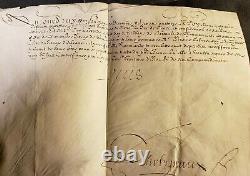 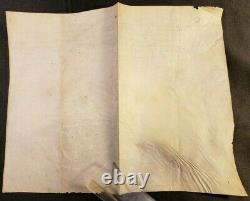 LETTER ON PARCHMENT SIGNED BY KING LOUIS XIII AND. COUNTERSIGNED BY PAUL PHELYPEAUX de PONTCHARTRAIN. THE SECRETARY OF STATE FOR PROTESTANT AFFAIRS, A STATESMAN KNOWN FOR TREATY OF LOUDUN. Louis XIII (27 September 1601 14 May 1643) was a monarch of the House of Bourbon who was King of France from 1610 to 1643 and King of Navarre (as Louis II) from 1610 to 1620, when the crown of Navarre was merged with the French crown.

Shortly before his ninth birthday, Louis became king of France and Navarre after his father Henry IV was assassinated. His mother, Marie de' Medici, acted as regent during his minority. Mismanagement of the kingdom and ceaseless political intrigues by Marie and her Italian favourites led the young king to take power in 1617 by exiling his mother and executing her followers, including Concino Concini, the most influential Italian at the French court.

Louis XIII, taciturn and suspicious, relied heavily on his chief ministers, first Charles d'Albert, duc de Luynes and then Cardinal Richelieu, to govern the Kingdom of France. King and cardinal are remembered for establishing the Académie française, and ending the revolt of the French nobility. They systematically destroyed castles of defiant lords and denounced the use of private violence (dueling, carrying weapons, and maintaining private armies). By the end of 1620s, Richelieu established "the royal monopoly of force" as the ruling doctrine. [1] The reign of Louis "the Just" was also marked by the struggles against the Huguenots and Habsburg Spain.

Paul Phélypeaux de Pontchartrain (1569 21 October 1621), lord of Pontchartrain and Villesavin, was a French statesman. He served both Marie de' Medici and her son Louis XIII during a period of conflict between Catholics and Protestants in France, the French Wars of Religion. He was one of the negotiators of the Treaty of Loudun in 1616. Size: 11.3" x 8.7". The item "KING LOUIS XIII RARE AUTOGRAPH DECEMBER 1614 LOUIS XIII König von Frankreich" is in sale since Wednesday, May 15, 2019.