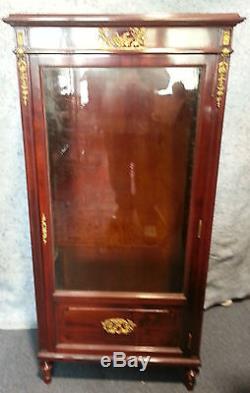 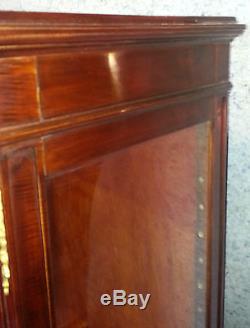 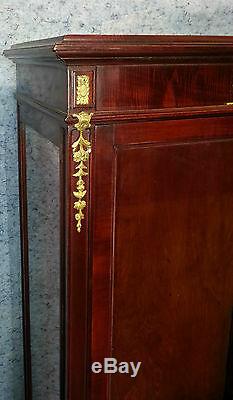 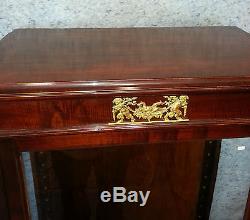 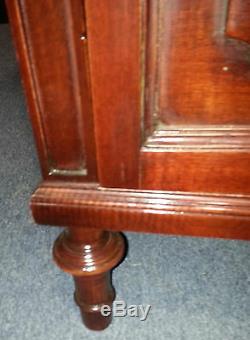 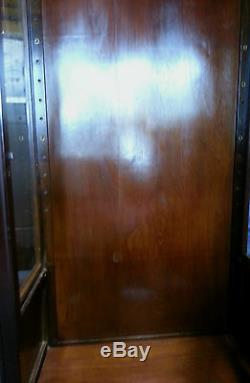 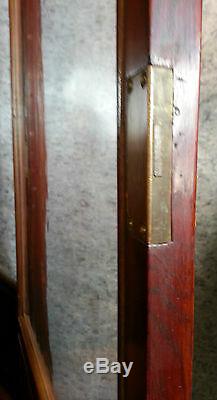 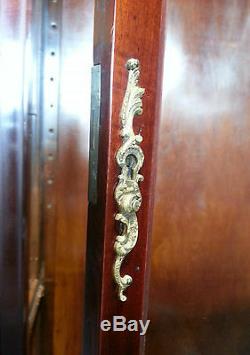 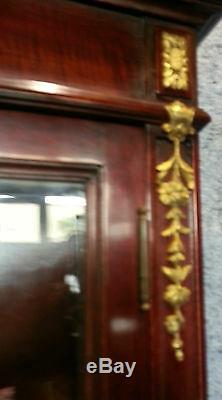 French petite vitrine by master cabinet maker with bronze mountings on the top as pictured. Great attention to detail, fantastic work on the gilt , gild or other else known as dore ormolu bronze mounting in other words gold plating. Accented by a main cast bronze panel used in several works of Francoise Linke Premier French ebaniste cabinet maker of the late 19th Century. To which we are atributing the piece but not signed. T his exceptional beautiful pieces are only for select and serious collector buyers.

UNmarked as seen on the images. Measures: 57" tall by 27" wide by 16 deep measurements taken at the widest part. In great condition considering age no chips or cracks or missing pieces can be seen minimal rubbing can be seen to the gilding. François Linke was undoubtedly the most celebrated Parisian cabinet-maker of his time.

Having served an apprenticeship in his home town of Pankraz, Bohemia, Linke moved to Paris in 1875 where, in 1881, he established his workshop 170, rue du Faubourg Saint- Antoine to produce furniture derived from styles popular during the Ancien Régime. By 1900, his worldwide reputation as an individualistic master of high quality furniture was already established. However, with a huge display, placing his extraordinary pieces in room settings and winning the gold medal for his Grand Bureau, Linkes participation in the Paris 1900 exhibition was to be the pinnacle of his career, and prompted critics, such as Charles Dambreuse, to comment : LExposition de la maison Linke est le gros événement de lhistoire du meuble dart en lan de grâce 1900 see C. Dambreuse, LArt Industriel à lExposition de Meuble de Style M. Linke, in Revue Artistique & Industrielle, Paris, July-August, 1900. Linkes international acclaim following the 1900 exhibition granted him a high degree of financial stability, not only allowing him to establish a large showroom on the fashionable place Vendôme, but also to pursue new and further distant markets by exhibiting at other international shows. Louis Worlds Fair in 1904, where he was again awarded a gold medal, Liège in 1905 and the Franco-british Exhibition in London in 1908. This allowed him to become the purveyor of the most distinguished families throughout the world. Linke furnished Kings such as Fuad Ier of Egypt or tycoons such as Raphael de Lamar in New York, the Bolivian tin magnate Simon Patino, the Buenos Aires billionnaire count Devoto. Like the inventories of his contemporaries such as Beurdeley and Dasson, Linkes work included adaptations of the distinct styles of 18th century important and royal French furniture.

However, his most extravagant exhibition pieces combined the Louis XV style with the Art Nouveau style. Linkes worked in partnership for the design and execution of the sumptuous mounts for these modèles entièrement nouveaux with the enigmatic sculptor Léon Messagé. In a volume of designs for furniture, gilt-bronze and silver, published in 1890 from his address at 40, rue Sedaine, Messagé interpreted the traditional Louis XV style but, just like Linke with the sinuous forms of his furniture, imbued it with distinct flourishes of the Art Nouveau. In an obituary after his death in 1904, the magazine Art & Curiosité paid tribute to this vigorous manner and new sense of movement, commenting: (ces) projets nés sous le crayon se formèrent dun jet plus rapide en la noble matière du bronze, ciselé dune main sûre...

Fran ç ois Linke was born in Pankraz in Bohemia and was celebrated by the French as one of the greatest ébénistes of meubles de style at the turn of the century. He began his apprenticeship with a Bohemian master at the age of thirteen. Four years later, he toured Austria, settling and working in Vienna for two years.

By 1875 he had arrived in Paris, where he seems to have been associated with Zwiener. By 1881, Linke established his own small workshop at 170 rue du Faubourg St. Taking 18th century styles as his starting point and adapting earlier styles to contemporary taste, Linke produced fine quality furniture, steadily expanding his business during the next 20 years. He firmly established his reputation after receiving a gold medal at the Paris Universal Exhibition of 1900 for his extraordinary Grand Bureau. He continued to use international fairs as a means of exploring new markets, exhibiting at the 1904 World's Fair in St.

Louis, the Liege in Belgium and the 1908 Franco-British exhibition in London. Linke's highly original designs sprang from the Régence and Rococo styles but were imbued with something quite new - Rococo curves were laden with gilt-bronze sculptural mounts in the tradition of A. Stylistically, the new designs still adhered to the Rococo; the novelty, however, was Linke's fusion of the Rococo with the liveliness and the fluidity of the'art nouveau'. The Revue called Linke's creations entierement nouveau, and continued to say that'Linke's stand is the biggest show in the history of art furniture in the year 1900...

The mounts, or rather sculpture, were characteristic of the finest pieces from the Linke workshops. The most original designs were almost certainly created in collaboration with the enigmatic sculptor Léon Messagé , who excelled in creating lively, high relief, allegorical figures recalling the styles of Boucher and Falconet. Linke's greatest successes were achieved during the years after 1900 and up to the beginning of World War I. He opened a showroom in the fashionable Place Vendôme and business flourished until World War II, although the popularity of the ancien régime styles already started to decline. Linke died at the venerable age of 91.

A newly released book about the life and work of Fran ç ois Linke has just been published by Christopher Payne. This 527 page hardcover book is a'Must' for every furniture collector. A showcase , or vitrine from Old French. Vitre , pane of glass, is a glassed-in cabinet. For displaying delicate or valuable articles such as objets d'art. Or merchandise in a shop. Metaphorically, a showcase is a way of displaying something. The item "French vitrine louis xvi francoise linke 19 century bronze ormolu gold gilt gild" is in sale since Thursday, March 21, 2013. This item is in the category "Antiques\Furniture\Cabinets & Cupboards\1800-1899".

The seller is "lukantiques" and is located in Hollywood, Florida. This item can be shipped worldwide.