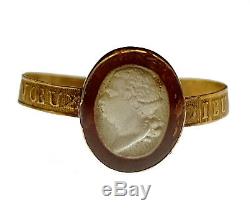 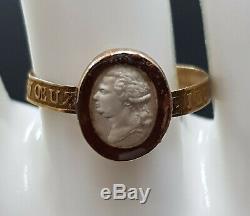 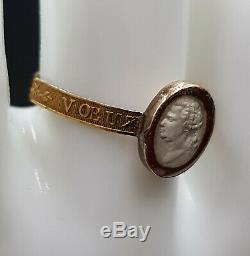 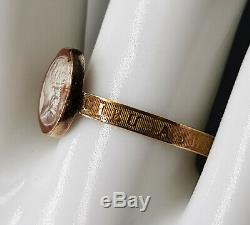 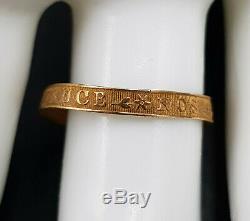 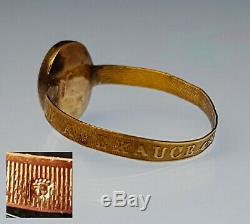 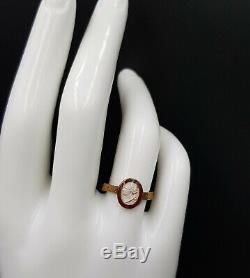 Well, so was the original owner of this highly collectable loyalist ring featuring a profile of King Louis XVIII of France. The profile paste, under glass, is attributed to William Tassie, nephew of the celebrated James Tassie who rose to fame in creating these miniature profile heads for the rich and famous of Britain and beyond during the 18th century. William successfully took over the business after his uncle's death in 1799.

Along this gold band we find the words, "DIEU A EXAUCE NOS VOEUX" meaning, GOD HAS FULFILLED OUR WISHES. We can only imagine the horror and frustration that Louis XVIII and friends experienced beginning with the violent removal and beheading of brother King Louis XVI and subsequent revolution that transpired in France. Along came Napoleon, prolonging the exile of Louis XVIII to safer places such as Prussia, England and Russia. Jubilation, at last, in 1814 with the defeat of Napoleon (notwithstanding the escape and return of the emperor briefly in 1815), the Bourbon Monarchy was restored and Louis and his loyalists took power... Let's get matching rings to celebrate!

Condition of the ring is good with wear around the edges of the medallion including a small piece of the gold encasing that has broken away (see photo). The delicate band is slightly out of round, however it slides easily onto a size 8 finger U. We do not recommend resizing this extraordinary museum-worthy jewel. The oval medallion measures 9.7 mms. As the items that we sell are often fragile and irreplaceable, great care is taken during packaging to ensure their safe transit and arrival. Items must be in the same condition as when received. The item "French Antique Loyalist Tassie Ring King Louis XVIII, 18k Gold 1815 Georgian Era" is in sale since Friday, July 26, 2019.

This item is in the category "Jewelry & Watches\Vintage & Antique Jewelry\Fine\Georgian, Pre-1837". The seller is "chevreuse-antiques" and is located in Chevreuse.