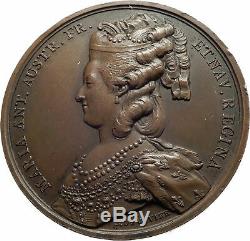 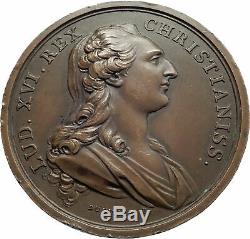 Item: i77577 Authentic Medal of. King: 10 May 1774 - 4 September 1791 A. LOUIS XVI and MARIE ANTOINETTE Bronze Medal 41mm (33.53 grams) by B. Duvivier Undated, Issued circa 1781 A. Bust of King Louis XVI right. REGINA, Bust of Queen Marie Antoinette left. Marie Antoinette (born Maria Antonia Josepha Johanna ; 2 November 1755 - 16 October 1793) was the last Queen of France before the French Revolution. She was born an Archduchess of Austria and was the penultimate child and youngest daughter of Empress Maria Theresa and Francis I, Holy Roman Emperor. She became Dauphine of France in May 1770 at age 14 upon her marriage to Louis-Auguste, heir apparent to the French throne.

On 10 May 1774, her husband ascended the throne as Louis XVI and she assumed the title Queen of France and Navarre, which she held until September 1791, when she became Queen of the French as the French Revolution proceeded, a title that she held until 21 September 1792. After eight years of marriage, Marie Antoinette gave birth to Marie Thérèse, the first of her four children. A growing percentage of the population came to dislike her, accusing her of being profligate and promiscuous and of harboring sympathies for France's enemies, particularly her native Austria. The Affair of the Diamond Necklace damaged her reputation further.

During the Revolution, she became known as Madame Déficit because the country's financial crisis was blamed on her lavish spending and her opposition to the social and financial reforms of Turgot and Necker. Several events were linked to Marie Antoinette during the Revolution after the government had placed the royal family under house arrest in the Tuileries Palace in October 1789. The June 1791 attempted flight to Varennes and her role in the War of the First Coalition had disastrous effects on French popular opinion. On 10 August 1792, the attack on the Tuileries forced the royal family to take refuge at the Assembly, and they were imprisoned in the Temple Prison on 13 August. On 21 September 1792, the monarchy was abolished. Her trial began on 14 October 1793, and two days later Marie Antoinette was convicted by the Revolutionary Tribunal of high treason and executed by guillotine on the Place de la Révolution. Louis XVI (August 1754 - 21 January 1793), born Louis-Auguste , was the last King of France before the fall of the monarchy during the French Revolution. He was referred to as Citizen Louis Capet during the final weeks of his life. In 1765, at the death of his father, Louis, son and heir apparent of Louis XV, Louis-Auguste became the new Dauphin of France.

Upon his grandfather's death on 10 May 1774, he assumed the title "King of France and Navarre", which he used until 4 September 1791, when he received the title of "King of the French" until the monarchy was abolished on 21 September 1792. Louis XVI was guillotined on 21 January 1793. The first part of his reign was marked by attempts to reform France in accordance with Enlightenment ideas. These included efforts to abolish serfdom, remove the taille , and increase tolerance toward non-Catholics. The French nobility reacted to the proposed reforms with hostility, and successfully opposed their implementation.

Louis implemented deregulation of the grain market, advocated by his liberal minister Turgot, but it resulted in an increase in bread prices. In periods of bad harvests, it would lead to food scarcity which would prompt the masses to revolt.

From 1776, Louis XVI actively supported the North American colonists, who were seeking their independence from Great Britain, which was realised in the 1783 Treaty of Paris. The ensuing debt and financial crisis contributed to the unpopularity of the Ancien Régime. This led to the convening of the Estates-General of 1789. Discontent among the members of France's middle and lower classes resulted in strengthened opposition to the French aristocracy and to the absolute monarchy, of which Louis and his wife, Queen Marie Antoinette, were viewed as representatives. Increasing tensions and violence marked by events such as the storming of the Bastille during which riots in Paris forced Louis to definitively recognize the legislative authority of the National Assembly. Louis's indecisiveness and conservatism led some elements of the people of France to view him as a symbol of the perceived tyranny of the Ancien Régime , and his popularity deteriorated progressively. His disastrous flight to Varennes in June 1791, four months before the constitutional monarchy was declared, seemed to justify the rumors that the king tied his hopes of political salvation to the prospects of foreign invasion. The credibility of the king was deeply undermined, and the abolition of the monarchy and the establishment of a republic became an ever-increasing possibility. In a context of civil and international war, Louis XVI was suspended and arrested at the time of the insurrection of 10 August 1792; one month later, the constitutional monarchy was abolished; the First French Republic was proclaimed on 21 September 1792. He was tried by the National Convention (self-instituted as a tribunal for the occasion), found guilty of high treason, and executed by guillotine on 21 January 1793, as a desacralized French citizen under the name of "Citizen Louis Capet", in reference to Hugh Capet, the founder of the Capetian dynasty - which the revolutionaries interpreted as Louis' family name. Louis XVI was the only King of France ever to be executed, and his death brought an end to more than a thousand years of continuous French monarchy. France , officially the French Republic (French: République française), is a sovereign state comprising territory in western Europe and several overseas regions and territories. The European part of France, called Metropolitan France, extends from the Mediterranean Sea to the English Channel and the North Sea, and from the Rhine to the Atlantic Ocean. France spans 640,679 square kilometres (247,368 sq mi) and has a total population of 67 million. It is a unitary semi-presidential republic with the capital in Paris, the country's largest city and main cultural and commercial centre. The Constitution of France establishes the state as secular and democratic, with its sovereignty derived from the people. During the Iron Age, what is now Metropolitan France was inhabited by the Gauls, a Celtic people.

The Gauls were conquered in 51 BC by the Roman Empire, which held Gaul until 486. The Gallo-Romans faced raids and migration from the Germanic Franks, who dominated the region for hundreds of years, eventually creating the medieval Kingdom of France. France emerged as a major European power in the Late Middle Ages, with its victory in the Hundred Years' War (1337 to 1453) strengthening French state-building and paving the way for a future centralized absolute monarchy. During the Renaissance, France experienced a vast cultural development and established the beginning of a global colonial empire.

The 16th century was dominated by religious civil wars between Catholics and Protestants (Huguenots). France became Europe's dominant cultural, political, and military power under Louis XIV. French philosophers played a key role in the Age of Enlightenment during the 18th century. In 1778, France became the first and the main ally of the new United States in the American Revolutionary War. In the late 18th century, the absolute monarchy was overthrown in the French Revolution.

Among its legacies was the Declaration of the Rights of Man and of the Citizen , one of the earliest documents on human rights, which expresses the nation's ideals to this day. France became one of modern history's earliest republics until Napoleon took power and launched the First French Empire in 1804. Fighting against a complex set of coalitions during the Napoleonic Wars, he dominated European affairs for over a decade and had a long-lasting impact on Western culture. Following the collapse of the Empire, France endured a tumultuous succession of governments: the monarchy was restored, it was replaced in 1830 by a constitutional monarchy, then briefly by a Second Republic, and then by a Second Empire, until a more lasting French Third Republic was established in 1870. By the 1905 law, France adopted a strict form of secularism, called laïcité , which has become an important federative principle in the modern French society. France reached its territorial height during the 19th and early 20th centuries, when it ultimately possessed the second-largest colonial empire in the world. In World War I, France was one of the main winners as part of the Triple Entente alliance fighting against the Central Powers. France was also one of the Allied Powers in World War II, but came under occupation by the Axis Powers in 1940. Following liberation in 1944, a Fourth Republic was established and later dissolved in the course of the Algerian War. The Fifth Republic, led by Charles de Gaulle, was formed in 1958 and remains to this day. Following World War II, most of the empire became decolonized. Throughout its long history, France has been a leading global center of culture, making significant contributions to art, science, and philosophy. It hosts Europe's third-largest number of cultural UNESCO World Heritage Sites (after Italy and Spain) and receives around 83 million foreign tourists annually, the most of any country in the world. France remains a great power with significant cultural, economic, military, and political influence. It is a developed country with the world's sixth-largest economy by nominal GDP and eight-largest by purchasing power parity. According to Credit Suisse , France is the fourth wealthiest nation in the world in terms of aggregate household wealth. It also possesses the world's second-largest exclusive economic zone (EEZ), covering 11,035,000 square kilometres (4,261,000 sq mi). French citizens enjoy a high standard of living, and the country performs well in international rankings of education, health care, life expectancy, civil liberties, and human development.

France is a founding member of the United Nations, where it serves as one of the five permanent members of the UN Security Council. It is a member of the Group of 7, North Atlantic Treaty Organization (NATO), Organisation for Economic Co-operation and Development (OECD), the World Trade Organization (WTO), and La Francophonie.

France is a founding and leading member state of the European Union (EU). World-renowned expert numismatist, enthusiast, author and dealer in authentic ancient Greek, ancient Roman, ancient Byzantine, world coins & more. Ilya Zlobin is an independent individual who has a passion for coin collecting, research and understanding the importance of the historical context and significance all coins and objects represent.

Send me a message about this and I can update your invoice should you want this method. Getting your order to you, quickly and securely is a top priority and is taken seriously here.

Whether your goal is to collect or give the item as a gift, coins presented like this could be more prized and valued higher than items that were not given such care and attention to. When should I leave feedback? Please don't leave any negative feedbacks, as it happens sometimes that people rush to leave feedback before letting sufficient time for their order to arrive.

The matter of fact is that any issues can be resolved, as reputation is most important to me. My goal is to provide superior products and quality of service.

How and where do I learn more about collecting ancient coins? Visit the Guide on How to Use My Store. For on an overview about using my store, with additional information and links to all other parts of my store which may include educational information on topics you are looking for.

The item "1781 France King Louis XVI & Queen Marie Antoinette Antique French Medal i77577" is in sale since Sunday, April 21, 2019. This item is in the category "Coins & Paper Money\Exonumia\Medals". The seller is "highrating_lowprice" and is located in Rego Park, New York. This item can be shipped worldwide.